Hello! This is another dev-log containing some more progress information for the next update (v0.0.95) that's coming hopefully soon. There's still quite a lot of progress needed to be done to release a new build. Here are some progress updates since the last dev-log:

Settings Menu will be added to the next version.

Here are some screen-caps displaying the currently implemented options you can mess with in the settings menu. Some milestone mentions for this include: 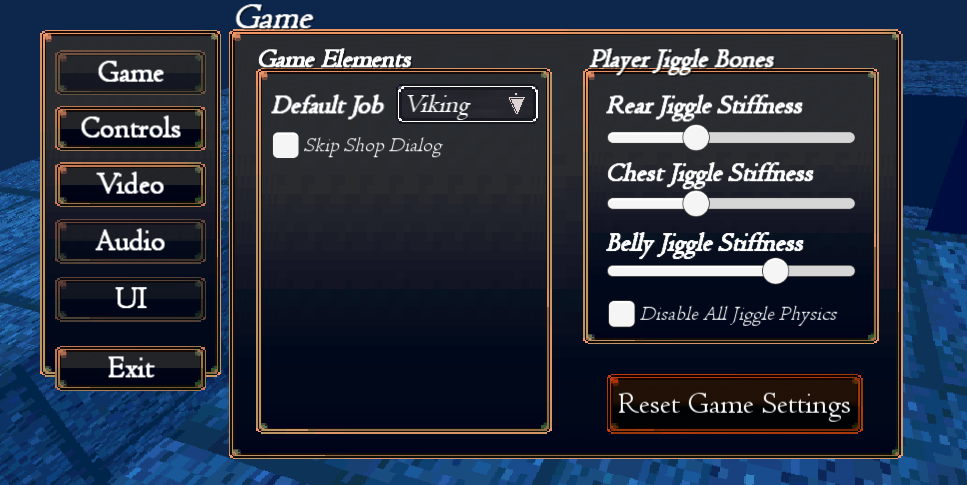 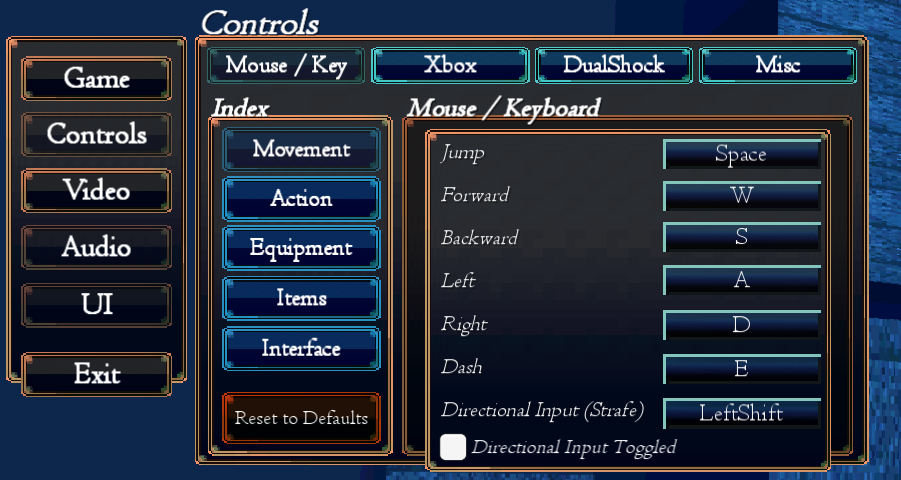 The outfit for the 4th playable job, (Warlock), has been designed and added for the next version. More information regarding abilities for the Warlock is TBA, as the ability system is still under development for job-based abilities.

A "prefix" data modifier system has been added for the next version. This will allow a smaller workload for both designing weapons, rings and creep types. Oh, and the staff weapon type is also added. It plays as a "heavy" version of the scepter. 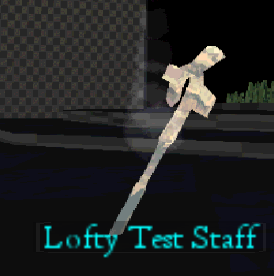 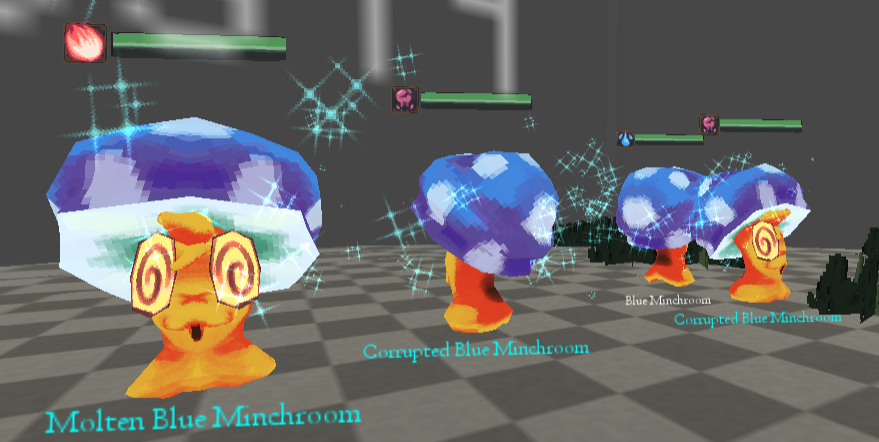 Alongside the Staff, the Axe Weapon Type is added as well. It has a wide-range normal attack, and a hammer-pounding styled charged attack. The Axe is heavy and slow, but very devastating.

Spell Scrolls are fully implemented, as they allow the player to override an ability slot when picked up. The player is open and vulnerable to incoming attacks while overriding, so it's best to be safe enough to use it while in the state. If attacked, the player will drop the scroll and will have to pick it up again. The scroll will not dissipate until the concurrent map is changed. 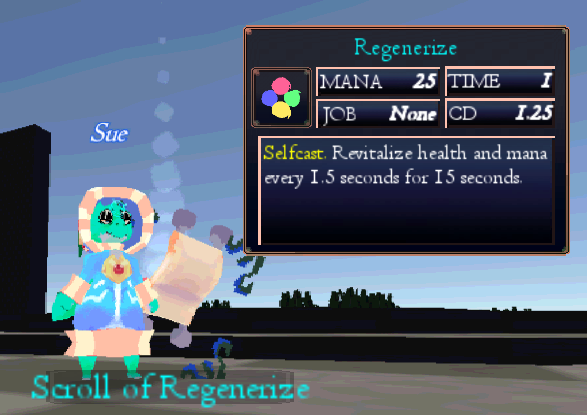 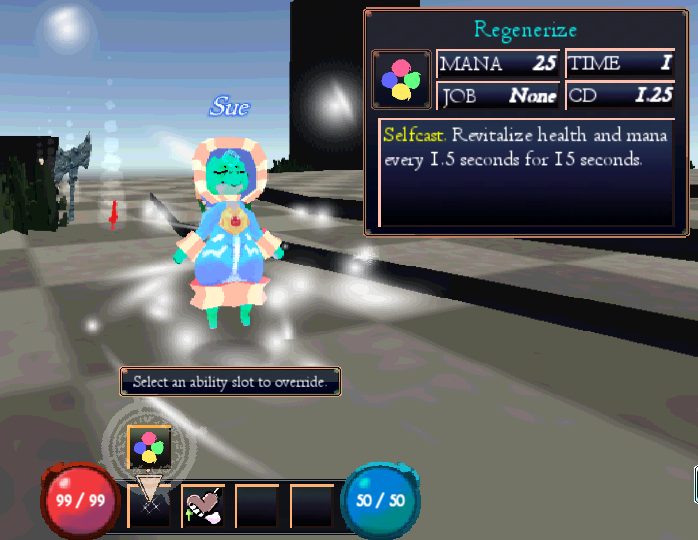 The Weapon Mastery system allows for the sense of growth/strength/progression for the character you play in the current game session. Each job will have their own max Weapon Mastery level for each Weapon Type in the game. (EX: Viking can reach level 5 Axe Mastery, but Maid can only reach Lvl 2 Axe Mastery).

Each successful hit made to a creep with the weapon equipped will apply experience to that specific Weapon Mastery. Levels will not degenerate/go down.

As of the early implementation, each Weapon Mastery level will determine these aspects:

Several UI updates are made, including a stat/equipment menu to better view stats, equipment, abilities and potentially more (Weapon Masteries). ToolTips are still a work in progress, but they no longer are in world space when highlighting an item object but rather in 2D space to better view them. 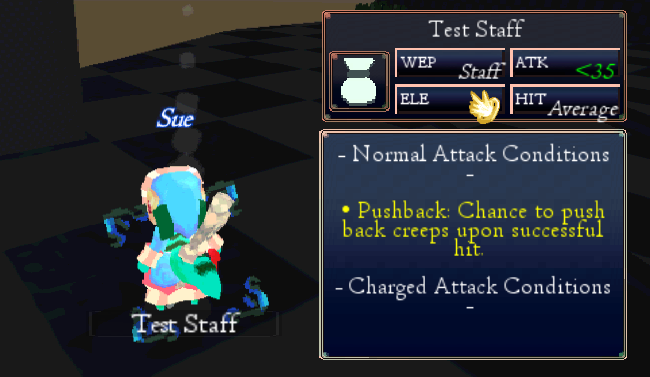 The Targeting System no longer requires the Player Character to face Creeps to target them. Instead, the targeting detection is make through the direction of the Game Camera. Targets can be rotated (tab-Targeted) as well, including the addition of target indicators for better transparency.

In-game emotes are added. While the gameplay itself isn't highly suggestive, the Player Character can act suggestive. There's more emotes to come by, but as of now you can spank your character and have them ass clap. Other emotes such as /sit, /wave and /recline are added too.

While there may be some other things that I haven't mentioned adding, all these features shown in this dev-log are pretty much the highlights of the development since the beginning of September. Tons of work is still needed to be made, including an actual fully functioning dungeon layout before I consider releasing another build. This month so far, I have been working on the combat/creep base-gameplay mechanics to make sure it's all working properly and it's fun, not to mention getting it to perform well via netplay.

Thank you very much for your support, interest, and patience!

Brave the dream realm of Everlost...

I'd get it on with the warlock

The warlock looks cool as fug~!!! Especially the familiars teased in that lil end pic. In love with those emotes too!! Can't wait to see more.

Would you be able to shed some light on what you're envisioning with the prefixes? Will it be just focused around stat increases or will their be some damage type /ability modifiers and maybe even some kiss-curse wonderfulness thrown in too? :D

The modifiers will allow for stat overrides, such as elemental damage types for example. They can also add passive buffs, "on-attack" conditional de-buffs, abilities, and different item drop tables too. There's a lot that can be done with them :D

Looking nice!  Will there be an updated demo in the future?  (or is it patreon only?)

There will be, and no, there is no pay-walling for any released test builds

A pleasant surprise!  Though I added some support for you anyways.  :)